Hitting the slopes not recommended

Today, we are going to talk about things that could potentially be hazardous to your health. Almost everyone knows about the health dangers of smoking, drinking too much, and telling your kids it’s time for bed. But not too long ago, I was skiing in the Colorado mountains, and halfway down the slope I saw a big sign that said, ‘INVERTED AERIALS SUBSTANTIALLY INCREASE THE RISK OF SERIOUS INJURY AND ARE NOT RECOMMENDED.’ I saw this just in the nick of time, too, because I was about to attempt an inverted aerial myself. By this, of course, I mean I was about to do no such thing. 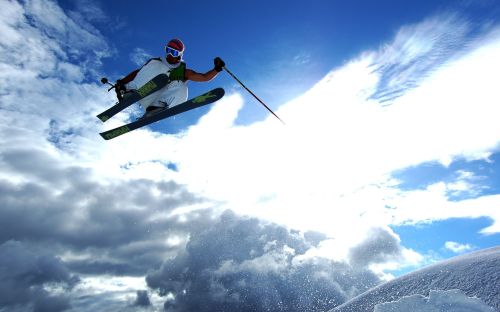 Someone who is not me.

The key word here is “inverted.” I would argue that just about anything “inverted” substantially increases the risk of injury. I can only remember one time I have ever been inverted, and that was when I was seven years old, and I had the hiccups—I stood on my head while I drank a glass of water. “Drank,” here, means “poured directly into my nose.” You might be wondering if this technique works. Oh yes. But not without a few minor side effects, such as total loss of short and long term memory, rapid facial hair growth (I had a full beard four minutes later, I’ll never forget that), an unexplainable urge to use the word “willywisp” as often as possible in casual conversation, not to mention that nowadays I’m just a little bit…weird.

As for that sign I saw, I’d say they need more of those sorts of warnings on the slopes. For the people who can’t seem to line up enough brain cells to know what could be dangerous, they need signs bearing simple warnings, such as ‘SKIING OFF A CLIFF INCREASES THE RISK OF INJURY,’ or ‘WE DO NOT RECOMMEND LIGHTING YOURSELF ON FIRE.’ Although sometimes lighting myself on fire sounds quite appealing when I’m riding up on the chairlift and I’m so cold that all molecular motion in my body has ceased and my scarf is wrapped so tightly around my face that I’m turning blue and yelling for help is useless because my tongue is frozen to the inside of my mouth and “help me” sounds more like “hoink a flea” but it doesn’t matter anymore because I’m at the top of the mountain where all I can do is lean forward a bit and fall out of my chair, hitting the ground with a frozen thud. This is how a typical day begins.

So after thawing out in the mountaintop restaurant by having a steaming, rich cup of hot cocoa poured all over me (WARNING: THIS MAY NOT BE THE IDEAL WAY TO THAW OUT), it’s time to ski.

I am not a good skier, I just like to go fast. In fact, there probably needs to be a warning sign about me. (I figure if I’m not careful, one day I might just fly off the mountainside and land in the parking lot, thereby eliminating the formality of actually skiing my way down.) Anyway, there I am—not a very good skier and a danger to everyone around me, leaving a trail of flames as I blaze down the hill—and glancing back every so often to watch whomever I’m skiing with get smaller and smaller, laughing, and thinking, “so long, suckers!”

Until I hit a mogul. Up into the air I go, completely helpless and suddenly not smiling anymore. But gravity is efficient, and wastes no time in splattering me all over the mountainside. The friends I was just laughing at, kind as they are, ski over to me, having retrieved my skis, poles, hat, and various body parts, leaving me to wonder: where was the warning sign for that bump?

There’s something about uncontrollably flying off moguls that works up an appetite, and lunch is always a welcome part of the day. Fortunately, at a ski resort, midday dining options abound. However, one warning sign I’d still like to see posted outside all of these restaurants is: ‘EATING HERE SUBSTANTIALLY INCREASES YOUR RISK OF FILING FOR BANKRUPTCY.’ After spending the equivalent of four car payments on lunch, I vowed to bring a sandwich next time.

To summarize: skiing is a risk, and involves large amounts of chance and luck. One statistical certainty, however, remains. How’s this for a warning sign: ‘PREPARE TO BE MUGGED AT THE TICKET WINDOW’? Because isn’t that essentially what happens? “Okay, that’ll be fifty for the lift ticket,” says the cashier, whipping out a bag and a gun, “and, uh…toss an extra hundred into the sack here. Come on, hurry up…” And we, the American consumer, insouciantly fling our money into the bag and go on our merry way, completely unfazed by what just took place, even happy about it. Just the thought makes me want to go back up the mountain and do some inverted aerials.

This and much more in my new 120-page e-book!
http://www.teaspoontimes.com