DENVER, CO—Despite the Transportation Security Administration’s strict ban on carrying more than three ounces of any liquid or gel through an airport security checkpoint, Ross Jensen, a Westminster resident and cocktail sauce aficionado, risked severe embarrassment, missing his flight, and being fined up to $10,000 when he slipped a full 24 ounces of homemade shrimp cocktail sauce past security screeners at Denver International Airport yesterday. 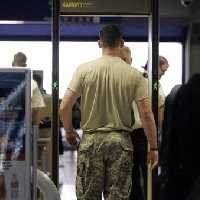 A metal detector, not unlike the one Ross Jensen passed through, which is designed to detect metal, not cocktail sauce.

Jensen, 41, was on his way to Oshkosh, Wisconsin, to attend his sister’s housewarming party, when the incident occurred. Although remorseful for breaking the law, Jensen admitted that had he known he was violating five to seven federal statutes, he might still have done it, because “the party would have really sucked with just three ounces of cocktail sauce.”

Department of Homeland Security officials are still trying to figure out how such a monolithic security breach could have happened. Tom Mason, director of aviation security at DIA, said, “If we had known how much cocktail sauce this gentleman was carrying, there is no way our agents would have let him past the screening checkpoint. I mean, if he’d been a terrorist bent on blowing up an airplane with cocktail sauce, he could have done it. That’s scary. I want some shrimp.”

Current TSA regulations prohibit the carriage of more than three ounces of any liquid or gel, whether it be shampoo, lotion, water, or even shrimp cocktail sauce. However, since Jensen was carrying the sauce in eight separate three-ounce bottles, including one in his pocket when he walked through the metal detector, he went unchallenged by any of the TSA screeners. X-ray machines do not have the capability to detect the type of substance inside a given container.

According to Jensen, guests at the party were quick to notice the large amount of cocktail sauce in the bowl next to the shrimp platter, and immediately asked him how he was able to get so much of the tomatoey, horseradishy goodness past security, onto the plane, and into their stomachs.

“I didn’t know I’d committed a federal crime until I got to the party, and everyone kept coming up to me, obviously baffled, to ask, ‘How?’ I swore it was an accident. But they were happy. They loved the sauce. And because they were happy, I was happy,” said Jensen.

After five silent minutes of smiling and staring peacefully toward the ceiling, Jensen continued: “You know, until now, I thought the TSA had been doing a great job making the public feel safe by maintaining the illusion of safety and security in our airports. Now I see it’s all a charade. They just better be glad I wasn’t a terrorist.”

Added Jensen: “I terrorized that party, though. The sauce was a hit. And maybe next time, I’ll make a barrelful—enough to plug the gaping hole I just found in U.S. airport security.”

This and much more in my new 120-page e-book!
http://www.teaspoontimes.com